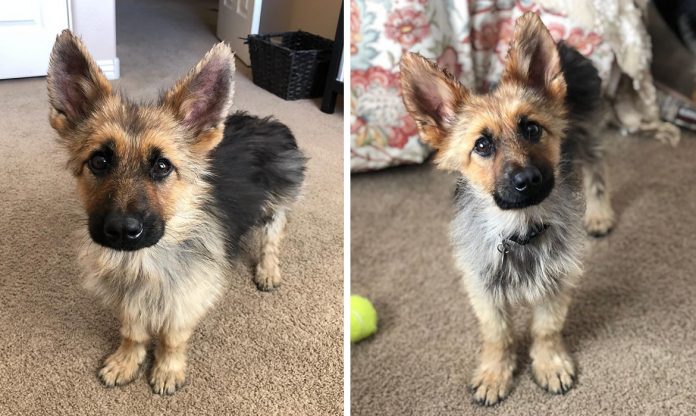 Full Grown Dwarf German Shepherd may be very rare but for the people who love puppies, these dogs are a super choice.

Most people are dog lovers, but we definitely can’t resist puppies! Unfortunately, they don’t stay as little fidos for long. Like everyone else, they’d have to grow up, which is very true for a large breed like German Shepherds (GSD).

But did you know that GSDs can stay small due to a condition called Pituitary Dwarfism?

It may make dogs look like cute puppies because of their size, but it’s actually a severe and incurable disease that can cause devastating health consequences. For some, it can even cause death.

If you’ve seen pictures of adorable-looking adult German Shepherds that look like perpetual puppies and you’re interested in having one, or maybe you already have a GSD who has dwarfism, and you want to know more about it, then we got you covered. Stay with us and keep scrolling.

What is dwarfism in German Shepherds, and how do dogs get it?

German shepherds with dwarfism is a genetic disorder that causes dogs to stay small. They are totally proportionate, which means that their legs and head are in proportion to their bodies. This gives them the appearance of being a puppy, even when they are fully grown.

Physically, canines have fox-like facial features, but GSDs with dwarfism stay much lighter in weight and shorter than a typical example of the breed. Some people call these dogs miniature German Shepherds.

White German shepherd from Puppy to Pal: The Complete Guide.

The only way for a dog to get Pituitary Dwarfism is for two carriers of the genes that cause the disorder are bred together. If one parent has the gene and the other doesn’t, the offspring won’t have the disease, though they can be carriers.

While it’s relatively uncommon to see a dwarf dog, the gene for Pituitary Dwarfism is thought to be carried by between 10 and up to 33 percent of German Shepherds. It’s a recessive gene, which means that two parents must be carriers in order for any offspring to inherit the condition.

If two positive carriers are bred together, about half of the offspring will be carriers, and a fourth of the pups could be dwarfs.

This autosomal condition is inherited in other breeds, too, not just German Shepherds. It can impact Australian Shepherds, Golden Retrievers, Labrador Retrievers, Spitz, Miniature Pinschers, Dachshunds, Weimaraners, Basset Hounds, Corgis, and wolfhound breeds like the Czechoslovakian Wolfdog, the Saarloos Wolfdog, and the Karelian Bear Dog.

Effects: How does dwarfism impact a German Shepherd?

As puppies, it’s difficult to tell the difference between a dog that is affected by the disease and one that isn’t. Only as they grow and develop does dwarfism become apparent.

Most often, vets notice this Pituitary Dwarfism in canines when they’re around 3 to 5 months because of skin and hair abnormalities, and of course, growth deficiency.

And the effects aren’t just physical. They also have problems with their liver and kidneys, which can cause lifelong health concerns. They can also have neurological issues that impact the spinal cord and can cause paralysis, or worse, death.

In dogs with this disorder, the pituitary gland is affected, reducing the hormones that it produces. This has an impact on thyroid function, hair growth, reproduction, and pain receptors in the brain.

When breeds who have dwarfism are not treated, it can mean a shortened life span, which is around four or five years. They also tend to have a less robust immune system, which makes them prone to getting sick from other illnesses.

Carriers who have the gene but aren’t impacted by the disease look just like any other German Shepherd, which is why conducting a blood test before breeding two dogs together is so important.

Having a dwarf German Shepherd as a family pet

German Shepherds with Pituitary Dwarfism can still make excellent companions, but you’ll definitely face some challenges that you might not have with other GSDs.

Due to the way the condition impacts the pituitary gland, dogs can have personality issues like aggression or anxiety.

Some pups may also be slow or dull because of the reduced hormones in their bodies. Miniature German Shepherds will usually need lifelong supplements with things like fish oil, and perhaps hormone supplementation as well.

If your GSD friend experiences pain when they play or move too much, you may need to limit their activity and install things like ramps and rugs to help them get around your home comfortably.

Because every dog is affected differently, it’s impossible to say what kind of physical activities your dog will have.

You should always chat with your vet to know what your pup can handle and what they should avoid. Your vet will likely need to do a thorough assessment to get a better idea of the specific do’s and don’ts for your pooch so they can give you guidelines.

That said, since many dogs have health issues that impact their spine, any exercise should be conservative until you know what your pup can handle.

Swimming can be a good way to exercise dogs that suffer from spinal issues, though you’ll need to keep them in shallow areas until you know how they handle swimming.

After that, you should always keep an eye on your dog to make sure they’re not overdoing it. Any limping or favoring a part of their body could be a sign that they’re in pain. If that’s the case, they’ll need to take it easy and maybe even be treated with ice for a little while to keep them comfortable.

German Shepherds with Pituitary Dwarfism keep their puppy coat longer than other dogs. But within their first year, it will begin to fall out, and the dog will become bald except for their head and lower legs. Their skin can turn dark and scaly, as well.

Treatment for the disease can help with hair loss and skin issues, but their coat will never be as thick as a healthy German Shepherd.

For those dogs who struggle with hair loss, you can provide a sweater in the winter to keep them warm, and sunscreen in the summer to protect their exposed skin.

Because they have lower immunity, they can be prone to skin infections that can be deep and difficult to address.

Facing the challenge of owning a Dwarf German Shepherd

Caring for a German Shepherd or any dog with a health condition like Pituitary Dwarfism is never easy, but it’s possible. With the right treatment plan, medications, and care, you can give your furry buddy a happy life.

The good news is that dwarfism is totally preventable. It only requires that the parents or breeding stocks go through genetic testing before the mating process to make sure that the disorder or any other illness isn’t being passed along from generation to generation.

Do you have a Miniature German Shepherd or another breed with dwarfism? Anything else to share fellow paw parents about pets with this kind of health problem? Share your stories by commenting below.

admin - December 18, 2019
2
German Shepherds are undoubtedly the best and most loyal dogs in the world. One of the strong and recognizable features of these...

Why Your Dog Should be on Leash in Public Areas

admin - September 26, 2020
0
Dog Leash is something very much important while roaming around in public areas or when some guest visit your home or when...